This post is about the Privacy Policy for Pig Dog Bay apps, including CleverDic Crossword Solver, Anagram Solver, Angram Solver iOS, Weight Tracker, Mortgage Calculator and Codeword Solver.
I am a developer based in the UK, I work as a sole trader under the name MPD Bailey Technologies. I produce Android apps which I distribute through Google Play under the developer name Pig Dog Bay. I also produce iOS apps which I distribute through the App Store under the name MPD Bailey Technology.

My apps may contain advertising delivered via Google Admob, I trust that Admob will not harm you or your device but please let me know if you have concerns about any ads that are shown.
Your privacy is important to me and I do not collect or store any of your personal information. My apps will however gather anonymous usage statistics via Google Play Services, Google AdMob and Firebase. These statistics are completely anonymous to me and allow me to monitor such information as the daily Google Play downloads.

Note that comments posted to the Pig Dog Bay Facebook, Google Play, Twitter and Blogger pages are public and may show your name and photo.
Disclaimers


My software is provided 'as is' without warranty of any kind, either express or implied, including, but not limited to, the implied warranties of fitness for a purpose, or the warranty of non-infringement. Without limiting the foregoing, I make no warranty that:
The Weight Tracker App is for information purposes only and is not intended to be used for medical purposes. I am not a doctor or have any medical training.
Warning, CleverDic Crossword Solver, Codeword Solver, Anagram Solver and Anagram Solver iOS apps use large dictionaries and so may contain words that may be offensive to you. Any offence caused is completely unintended.

Finally
I am a software engineer, not a lawyer! I write apps for fun, learning, a little money and the hope that many others will enjoy using my apps.

Mark Bailey
Posted by Pig Dog Bay at 15:48 No comments:

Codeword Solver is a new App for Android to help you with your Codeword puzzles. Codewords, also known as Codebreakers are puzzles like crosswords but without any clues, instead each square is given a number, 1 to 26, and you have to find the corresponding letter for each number. Some puzzles typically give you a few letters to get you going, but even so it can be hard to get started, this is where this app comes in!

Okay, lets try to solve this Codeword, we begin by entering the known letters. 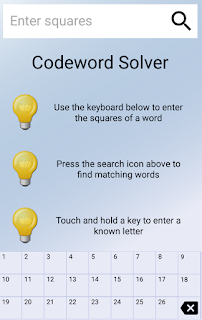 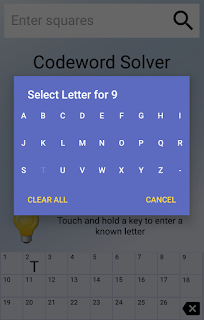 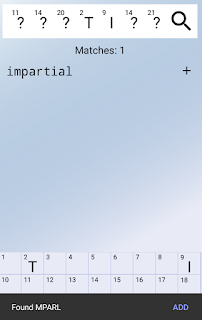 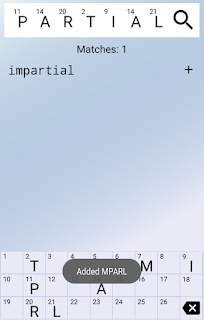 Press the + to add the letters to the keyboard. Hold the backspace key to clear the query. You can look up word definitions by touching and holding a word: 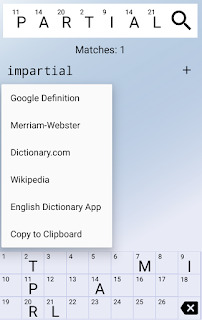 Select from a list of web / app options to find the words meaning, below I chose the English Dictionary Offline app, which is free on Google Play: 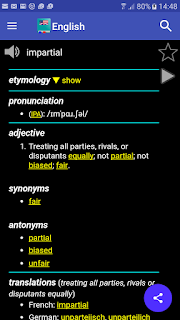 You now have more than enough letters now to get started and crack the Codeword by yourself. The Codeword above was fairly easy since it contained a long word with several known letters.  I don't recommend it, but the app will make mince meat of the rest of the clues: 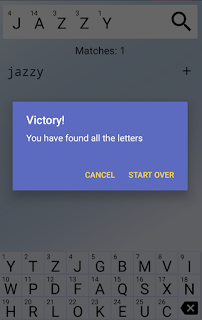 Other code words are more tricky and you will have lots of possible words to choose from. The app can help here by spotting any common letters: 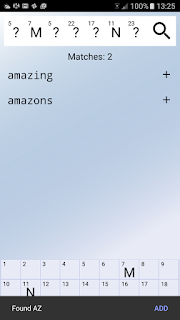 Here the app has spotted that A and Z are common and so gives you the option to add these letters.
If you are getting 100 matches (the maximum) try other clues, also take a guess at one or a few of the letters. The app is there to help you with the puzzle and not solve it for you, as where is the fun in that?