I'll show you how to effectively use the CleverDic Crossword Solver app to solve cryptic crosswords. The information here also applies to the sister app, Anagram Solver. Firstly I'll summarize the powerful search functions and then we will complete a real crossword.

This is the most common search as you will usually have a few letters in a clue and is useful for all types of crossword puzzles. You use a full-stop (or period) to represent a missing letter:

CleverDic finds 24 words such as raspberry, ragpicker, and respected.

Cryptic crossword clues sometimes give you the letters of the answer, this is useful when you don't have any letters yet to search, for example:

Sort of cable - flatter one, aluminium (7)


Well one is I (Roman numeral) and aluminium is AL (its chemical symbol), so I'll try this search:

I get 31 matches and I quickly find coaxial (coax = flatter).

Tip: Consonants, especially JKMQWXZ are really good for narrowing down the number of matches.

Tip: Big words with over 12 letters are good for giving narrow searches

Cryptic crosswords always have a few clues with anagrams, the easier crosswords have lots of anagrams. In CleverDic just enter the letters and it will find all the matching words that use those letters, enter:

to find purse, sprue and super.

All very well, but how do you spot anagrams in the first place? Well the setter will use certain words to indicate an anagram such as, sort of, unfortunately, spreading, make, manufactured, maybe and could be.  Since the app is quick and easy its worth just trying out letters to see if they make a word even if you are not sure there is an anagram in the clue.

Tip. Sometimes the letters will be spread over several words and maybe punctuated.

Can you spot the anagram here (being manufactured is the indicator):

I show you the solution later

Stratus is an anagram as indicated by spreading, but is only 7 letters. no problem CleverDic can smartly deal with this using the Supergram feature, enter:

The + symbol represents the unknown letter, the search returns 5 matches with stardust looking like the best fit for the clue, something in the heavens!

Tip. If you have several unknown letters use a + for each letter.

Here is a harder example with several missing letters:

Irrational is an anagram indicator, so I searched for fear+++ which gave me 197 matches, luckily I had the first letter, A, and there were only 8 words in the list that started with A. Aquifer is a rock holding water, the missing letters are qui, AQUIFER, quip is a joke or crack and short means the that the last letter of QUIP is knocked off.

Some clues give you too many letters and it may not be clear which ones to throw away. Not to fear as CleverDic will drill down in an anagram and find you the smaller words.

Most crossword/anagram solver apps in the marketplace only solve one word anagrams, CleverDic can take you letters and make two words with them,

To use this feature, type in your letters but add a space to split the letters, eg abcdef ghi will search for 6 and 3 letter words. For fun try your own name or football club,  for example,  enter manchester united to find lots of funny names such as mechanised nutter.  Note the order of the letters is unimportant, its the placement of the space that decides the word sizes.

Tip. A lot of clues have 3 word answers one of which is usually 'and' or 'the', remove these letters from the anagram so you can search for the other two words.

The Monday crossword is usually a nice easy one to gently ease you back in! I like the i crossword as they publish crosswords from several different setters who normally publish in the Independent. 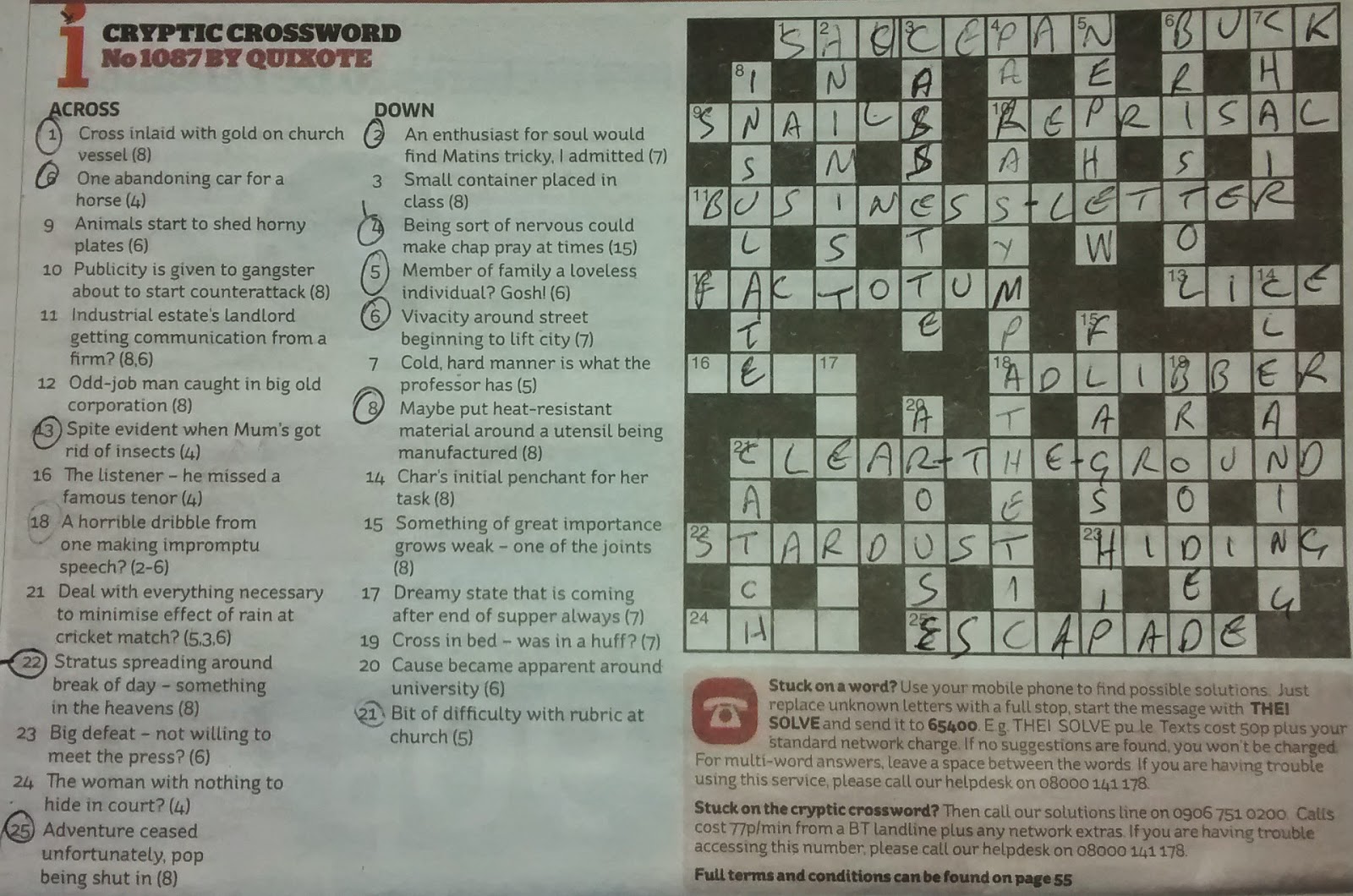 So far I had the following letters

Performing a search, returned 31 matches, so to help narrow down the search I guessed that gold means the letters au, the chemical symbol for gold,
so now I refined the search to
.au..p..

saucepan is a vessel, au is gold, ce is church and span means to cross. It all makes sense!

I had the following letters

Which gave 77 matches, too many to look through.

Maybe its an anagram of animals, but its 7 letters, should I disregard the first letter (starts to shed?), nimals? No need, CleverDic shows sub-anagrams, eg all the 6 letter words in a seven letter anyway. There are fifteen 6 letter words that can be made from animals, but none fitted my clue.

Looking at 3 down, I had two solutions cassette or corvette, so now I could see which suited 9ac best:

.N.I.R  using corvette gives 4 matches, but none are any good.
.N.I.S  using cassette gives 14 matches, snails looks like a candidate.

I had two letters in the clue,

Gives me 19 matches, a lot of the words I've not seen before, I'll see if I can find another letter before trawling through 19 words. After solving the easy 8dn, I now have:

Holding down factotum, gives me the following definition:

an employee who does all kinds of work.
"he was employed as the general factotum"
synonyms: odd-job man, (general) handyman, general employee, man of all work, maid of all work, jack of all trades, personal assistant;

Spreading indicates anagram, stratus is one letter short so we need to use the supergram feature:

break of day is the clue that gives us the missing letter, d, so now we have all our letters

This fits the bill for something in the heavens

I had no letters but ceased looked like a partial anagram, 'unfortunately' usually means anagram. Searching for

Gave me 30 words, escapade popped out as it means adventure, the extra letters were PA (eg father or pop!).

I had the letters:

Which gave me 30 matches, two of which seemed to make sense cassette and corvette.  Cassette makes sense with the wordplay placed (set) in class (caste). Corvette made sense, its a small boat (container?) and its also a class of sailing boat. Hmm, in these cases I look to see how the words fits with other clues, the best fit was cassette. See 9ac.

could make looks like an anagram indicator, lets try

Holding the word to look up its meaning:

"relating to the part of the autonomic nervous system which balances the action of the sympathetic nerves. It consists of nerves arising from the brain and the lower end of the spinal cord and supplying the internal organs, blood vessels, and glands."

Fits my 2 letters, fits the anagram and is something to do with nervous, an acceptable answer!

I had the following letters

This gives me a list of 34 words, quickly looking through the list I see Bristol. Let's break this down,
ST street, L beginning to Lift, but brio? Using CleverDic I looked this word up and it means vivacity.

I only had two letters but I guess the third*,

Which one, all seem good? Well leaning is a penchant and cleaning is a clever answer to a clever witty albeit sexist clue!

(* 21ac mentioned cricket, this usually indicates xi (11 players), side or ground, so I used the n from ground).

I only had two letters but good ones:

Which gave 8 matches, flagship. Flags for growing weak and hip for joint.


As you can see from the picture I had a few clues left, please leave a comment if you solve them!
Pig Dog Bay

The latest version of CleverDic has been released on Google Play. CleverDic is the essential Android App for anybody who loves crosswords and other word games. 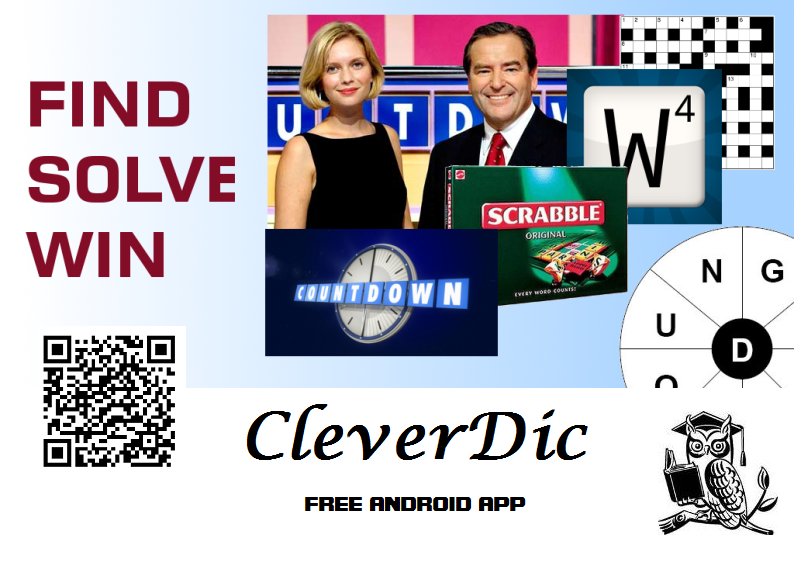 Supergrams! Not Super Gran! Although Super Gran would love this new feature.

Supergrams, allow you to find larger words that contain the letters you specify. For example, ClEAr and spACE are supergrams of the letters ACE. This is a very useful feature when you only know a few of the letters in a word.

For fun find larger words that contain your or your friends' names, enter Kayleigh* to find breathtakingly and heartbreakingly! The asterisk * indicates a wildcard supergram and will find all larger words. 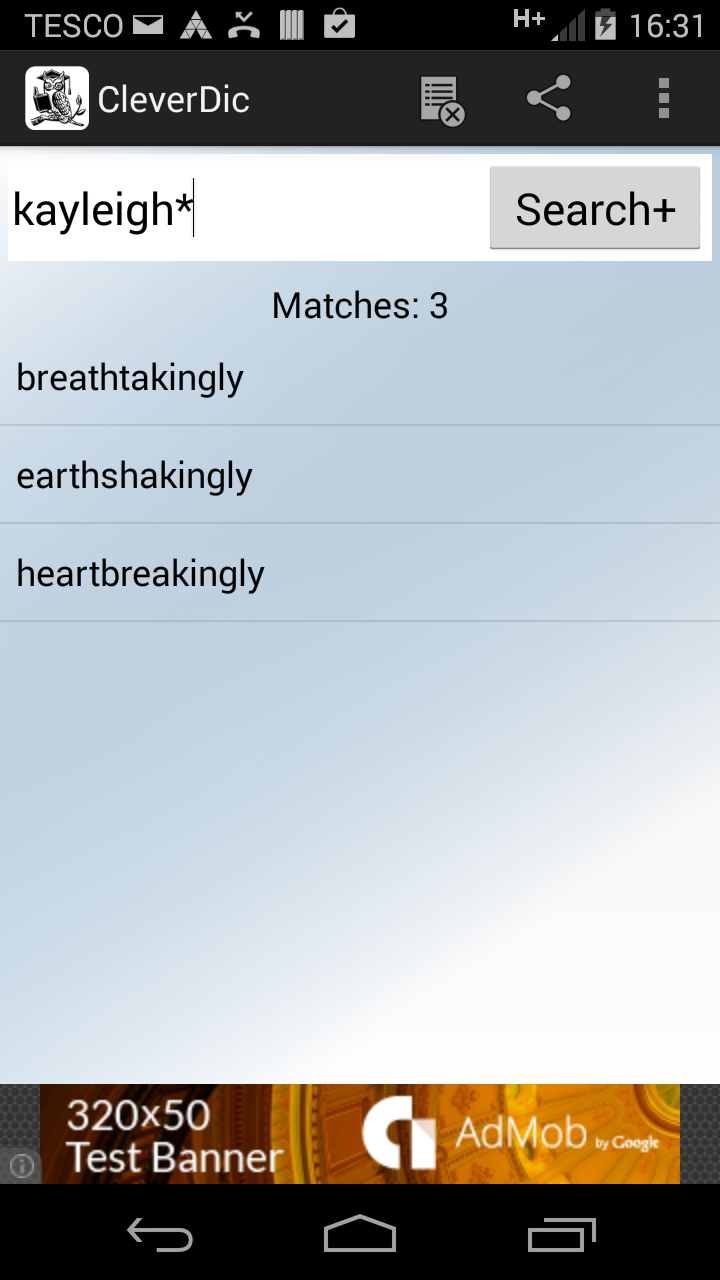 Cryptic crosswords sometimes have clues that provide you with a partial anagram or a few letters of the answer. In these cases you know the size of the word and the letters to try, here is an example from the Guardian:

5d Cable screwed Post Office over, which may humour some deluded people (7)

The answer is PLACEBO, PO (post office) and CABLE the partial anagram. If you spotted CABLE as a partial anagram as indicated by the word screwed, enter cable++ into CleverDic. This tells CleverDic to find all 7 letter words that contain the letters CABLE, the ++ pads the length of the word to 7. 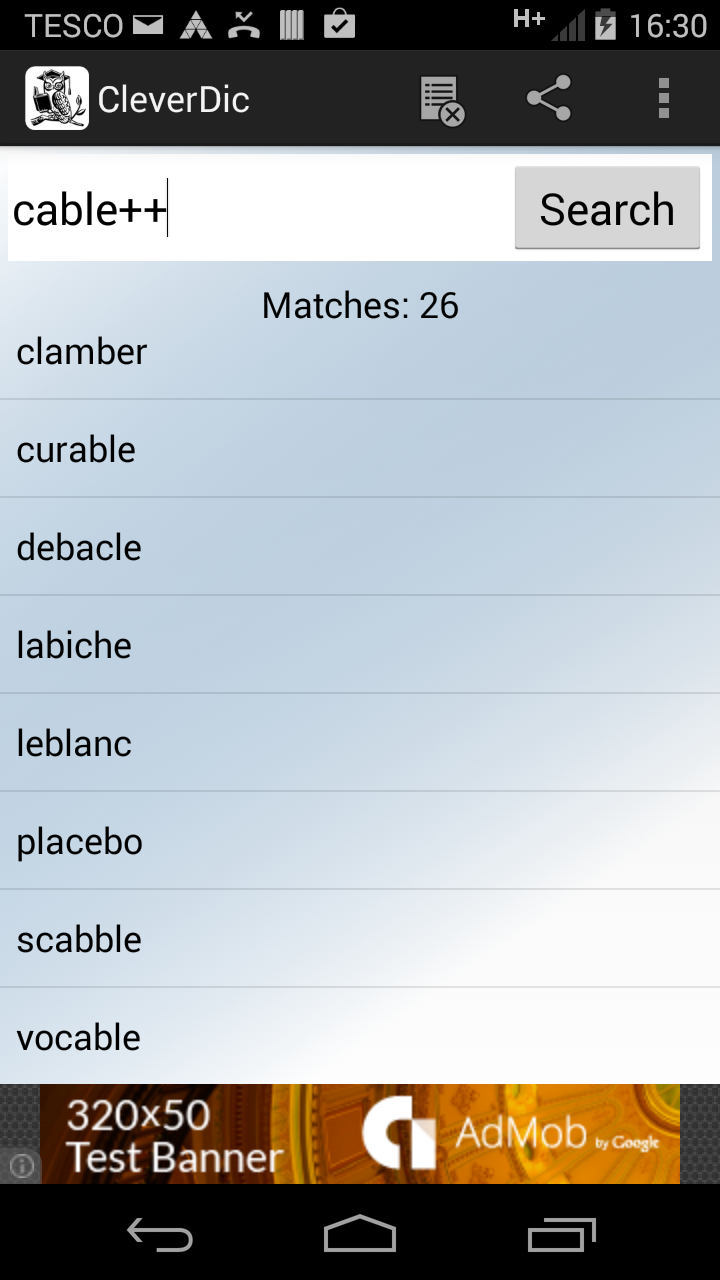 The clear button now shows the tip box again, quite handy with all the powerful features that are available to you.

Debbie Kerr and others have asked they would like larger fonts, a great idea which I'm now investigating.