Fantastic new feature added in this release, Wildcard Searches! Use the hash symbol, #, to represent 1 or more unknown letters, for example:


Wildcards are a great new feature if you are a Scrabble or Wordfeud player, for example you may need to find a work that fits across other letters, x and t:

Look at your letters to see which word fits.

Search results are now sent immediately to the screen without waiting for the search to complete. By using clever programming techniques (multi-threading) you can look through your results as they are coming. Most searches still take less than a few seconds to complete.

Jelly Bean 4.2.2 has just been released along with the latest programming SDK (v17). CleverDic has been updated to the latest code and thoroughly tested on a Google Nexus 7 and Galaxy Ace.


Hope you like the new features, please drop me an email or leave a comment with any feedback.

The latest version of CleverDic has been released, the most versatile crossword solver and anagram finder for Android. Lots of new features have been added:


Many thanks to Paul Nithsdale who suggested most of these new features and whom was kind enough to test a beta version of the release.

Admob banners are now removed for small screen devices and no adverts are shown when in landscape mode (except for extra large screen devices). I've tried to prevent ad banners appearing when the soft keyboard is showing, however this does not work 100% of the time.

The text size for the help screen can be set to small, medium or large from the menu on the help screen. To help with devices where memory is scarce I now allow the app to be moved/installed onto memory cards.

Lynn Miller has asked if the sub-anagram feature can search deeper, currently when you enter a nine letter word, CleverDic will search for 9 and 8 letter words. It takes about half a second on average to perform a search, so it takes about 5 seconds for a complete 9 letter search with sub-anagrams. To also search for 7 letter words would take over 30 seconds. In order to implement this feature I will need to boost the search algorithm performance, so it may appear!

Darcy Moore has asked for a bigger dictionary, currently CleverDic uses an open source dictionary with 88,000 words. The competitor app uses a dictionary of over 230,000 words. I'm planning to release a paid for / pro version of the app that uses a larger dictionary and is ad free.

Hope you like the new features, please drop me an email with any feedback.

A new version of Weight Recorder, the app that keeps track of your weight so you can keep an eye on your diet.

Many thanks again to James Rendek who has provided valuable feedback and support.


Bug fixes in this release: 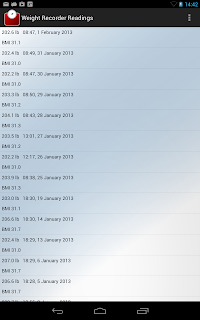 I looking into a new feature that allows you to export the chart as an image via an email attachment. I'm going to hold off making a Pro version of the App until Easter as I'll need a little time to put it together.
Posted by Pig Dog Bay at 14:46 No comments:

In this report I'll present the latest statistics and earnings of my Android apps.

January saw the release of Weight Recorder and is currently getting over 50 downloads per day. CleverDic reached an all time high of 242 downloads per day but has recently fell to below 100.