A new release of the diet app Weight Recorder is now available from Google Play. 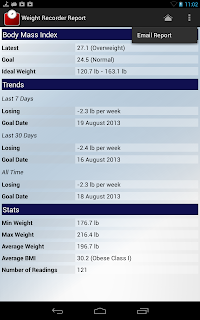 The report screen has been completely revamped for a more professional look. The statistics section has been streamlined to give a more concise report. 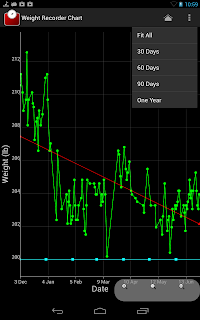 The chart screen now sports zoom buttons to make it easier to zoom in or out of your data, a third button resets the zoom. I've increased the chart axes font sizes by 2 points, as requested by Geoff Francis.

Tammi Kirlew reported strange trend predictions, dates around 1910 were being predicted for her target weight. Turns out this is down to something called the Year 2038 Problem which is similar to Y2K or Millenium bug. I've changed the string formatter which I use and now dates well past the year 3000 are OK! Thanks for the feedback Tammi.

When adding your daily weight the previous weight is stored so that you only need to adjust your weight slightly day to day. This stored weight is now converted correctly when you change the weight units.

The code has been completely revamped or refactored as programmers say. I split the user interface, data and logic code into separate parts. This allows me to write automated tests called unit tests for each little chunk of code. I spent several weeks doing this but the pay off is that I now have over 80 automated tests and the code is now easier to maintain.

This release I put a lot more effort into testing, even checking the upgrade from 1.06 to 1.07 in various locales. Obviously I put the mockers on myself and released a corrupted binary to the Market. I still don't know why I created a corrupted binary, you just click a button in Eclipse and out it pops, but I should have double checked it. I've now put a release procedure in place to prevent this sort of thing happening in the future.

Many thanks to Jacques Block, James Rendek, Julia Clark and Christian Niemietz for quickly alerting me to the faulty binary. Apologies for any data loss caused, please let me know if you need help with data recovery.

Facebook integration is still on the cards. I didn't realize that you can actually export to GDrive and Evernote already which makes sharing data and back-up a doddle.

Priority will be putting an automated back-up system in place to prevent data loss. I'm thinking that the database should be saved to a file on the sd-card every week.