A new version of Weight Recorder, the diet tracking app, has been released with new exciting features.

James Rendek requested that the app should let you import data as well as exporting data. To implement this I decided to let the user copy and paste their data directly into the app. Example data here:


The idea is that you would open up the text file or email containing the data, select all, copy and then paste into the app: 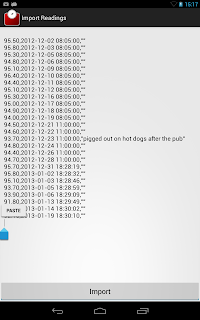 Since this is raw data and I consider that it is important that data should be stored in a standard format so that it can be easily exchanged, there are several points to note.


If these restrictions are too inconvenient, please drop me an email and I'll try to accommodate extra settings such as expressing weight in pounds.

Adrian Smith requested the British (and Irish) weight units Stones and Pounds. In Britain people quote their weight in stones,  for example 14 stone and 9 pounds which is same as 205lb.

The difficulty here is that I didn't want two text fields, one for stones the other for pounds. In the end I designed a custom number picker that displays the weight in the correct units and format. You can now adjust the weight by small amounts (1 pound or 0.1kg) or press the button showing the weight to enter it as a decimal number. I've removed the speech for text feature for entering numbers as I can't see it been particularly useful.

Kevin Diles has request a paid version of the app without any ads. After researching Android App development  I reckoned there was no hope for paid apps on Android, but it looks like I was wrong.

In the next few weeks I'll put together a pro version of Weight Recorder with Admob removed. I'll also make the import and export features only available in the pro version so that users at least get some extra value for their money. Charges will be $0.99, £0.99 or €0.99 depending on country. The difficult part will be sorting out tax codes...

Hope the diet is going well, I've lost over 6 pounds since Christmas.

An optional trend line is now shown on the chart so that you see how your diet is going over time. The line is drawn using the best line of fit over the selected range of data points.

The report screen now shows your ideal weight range based on the BMI Normal range.  The trend analysis also tells you whether you're gaining or losing weight.

Andreas Weichert (creator of the excellent Time Sheriff app) has suggested using Google's Speech to Text in the data entry screens. You can now speak your weight! To be honest I find it a little tricky to use, to enter 92.4 kg, you need to say nine - two - point - four. I found that when the units are in pounds, I struggled to say for example 202.7 lbs.

The data entry screen now shows the last weight reading entered (also Andreas' idea)  and returns you  to the dashboard when you press the add button.

James Rendek has requested a feature to be able to import data into the application. This is a great idea and one that I want to be able to get implemented for the next release. Having considered several methods I propose to allow the user to cut and paste their data (in CSV format) into the application. This method avoids using the file system which has several pitfalls. 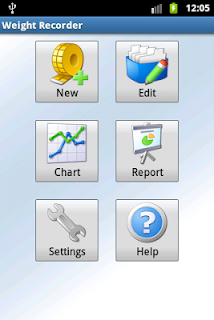 Just in time for all of those diets, Weight Recorder has been released! The app allows you to enter your daily weight measurements so that you can keep your diet on track. Your data can be viewed as a chart, a list of readings or a statistical / trend analysis report. Importantly your data is easily exported via email so that you can view it in Excel or any other spreadsheet.

The idea for the app came when I purchased a set of bathroom scales and I began entering my weight into a spreadsheet. There must be an app for that? There are several excellent apps already available on Android but there is room for improvement. Looking at the user ratings, several people asked to be able to write comments when entering their measurements. This is quite a good idea as you can make notes about any  dieting activities, eg 'I did an hour extra at the gym today'.

Weight Recorder has a dashboard design that allows you to navigate easily between activities. Other apps I noticed seem to cram to many features and buttons into one or two activities. My philosophy is to keep things simple and I did this by dedicating each activity to a single function, eg the chart activity just shows the chart. 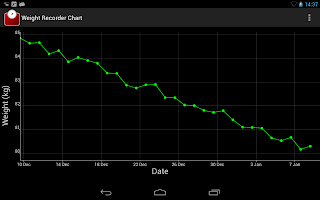 The data is stored in an SQLite database which is part of the Android OS. This means that the data storage is more robust and secure than say simply storing it in a file. As mentioned above, it is important in my opinion to allow the user full access to their data so that they can make back ups and share with other applications. Currently weight recorder will allow the user to send their data via email, in a csv (comma separated values) text format which can be easily read by a spreadsheet and human alike. Also available are the standard CRUD functions that allow you to create, read, update and delete readings from the database.

Like CleverDic releases will come often with new exciting features and updates. Already in the pipeline are trend and BMI plot lines for the chart. 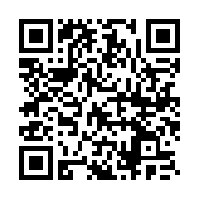 In this report I give the latest statistics and earnings on my Android apps.

Over Christmas CleverDic has been receiving more than 120 daily downloads. December was by far the most successful month which saw release 1.10 of the app and much more effort towards app store search optimization.