Why is it that programming books always do a lousy job of teaching you Object Orientated Programming?


Before I begin, just answer these questions:

If you answered yes to any of these, its not your fault, its how programming books teach you and how most frameworks are built.

Every book explaining OOP, uses the shape example. It is intuitive and allows the tech author to show you all the syntax and guff. It works too, all shapes implement an area() function and you can use the shape classes interchangeably, let area = myLovelyShape.area()

The example breaks down when you add properties, a circle will have a radius, a rectangle width and height, a square a length and a scalene triangle has both angles and sides. The objects may all be shapes, but now they are also unique from one another, in the sense of their API's, as they each have different properties.

You've written a graphical editor and you have a dialog box that pops up that allows you to edit the shapes properties. Wait though, the properties are different for each shape, you will need a custom dialog for each shape! So your options are:

How do you know which dialog to create? I've seen this too many times:

The problem here is you're downcasting, this if statement will have to keep growing as you add more shapes to the code. Its more code to maintain and attract bugs:

Bug #00042
Open:
when I have a pentagon and click properties I get a message saying no such shape.

This is better and quite common, however reflection may grab properties you don't want the user to see or edit, so you need to pepper your shape class with annotations / attributes.

Also your model classes now have pseudo GUI code in them which goes against keeping the good practice of keeping data, logic and UI separate.

What if the properties are more complex such as angles in a triangle, your reflection code may check that a property is greater than 0, but it won't know that an angle in a triangle has to be less than 180°.

This is good from an OOP perspective as the details about the custom dialog are encapsulated in the shape class, so no need for a big if statement. However you're mixing data, logic and view code which makes the code harder to test, maintain and each shape class may be be growing into 1000's of lines of code.

No worries a design pattern or two can easily fix this, Abstract Factory and Factory method.

When a user requests the shapes dialog, you just call
shapeFactory.createPropertiesDialog()

Factory classes also allow you to easily return mock classes, so for your unit tests you could return a mock dialog that has no GUI. When you need to add a new shape, you add a new member to the ShapeFactory class

And create the HexagonFactory, Hexagon and HexagonDialog classes. Your new shape button on your toolbar can now be easily wired to call ShapeFactory.createHexagon()

Take care with design patterns tho, you can over use them (I admit I do). They make the code more verbose and harder to read sometimes.

Subclassing is just a bad idea especially when it goes beyond 2 levels deep. The problem is that you start to add new functions and properties to the subclass. There is rule of thumb called, the Liskov substition principle which basically states that subclasses should have the same public methods and properties, this way there is no need to ever downcast or worry about special cases.

Instead of subclassing you should use the 'has a' relationship instead of 'is a'. Which means instead of extending a class, you should instead use an instance of the class as a property.

The 'has a' Square re-uses code in the rectangle class without the restriction of being a rectangle type, leaving you more room to maneuver in the future. You will also save a yourself a lot of hassle, as if you make a change to a super class, inevitably you have to propagate the changes to all its child classes. 'Is a' makes your classes more tightly coupled than 'Has a', tighter the coupling the more easier it is to break your code when you make changes.

If you require a class to conform to an API, use an interface:

Martin Fowler, an OOP fanatic,  recommends to use subclasses instead of enums.

He argues that enums are sub types of a common super type, and instead of using ints to differentiate between enum members we should use the OOP tools at our disposal.

The advantage here with OOP is that its easier to new add types, using enums tho we would have to remember to update any switch statements.

Personally I still prefer enums and switch statements, easier to read and quicker to type than a bunch of wee classes.

Hang on a minute you say, Android SDK has frameworks that use subclassing quite extensively. I mean you subclass Activity and override lots of various methods to add your own behavior. Why is subclassing OK here?

Quick answer its not OK, I think that most frameworks after a few years become to unwieldy and complex.

Graphical API's naturally form sets and subsets which lead to API's that use deep layers of subclassing. The eggheads who first designed the Android graphical library, did a nice clean job. Overtime as new features got added, it became necessary to put some awful bodges into the code. The problem with deep hierarchies is that they are difficult to change. As a developer using the Android SDK, it seems big, difficult to adapt and small things seem to require complex work a rounds.

As a developer it is rare to come across any need to create your own class hierarchies, they just don't exist in most of the day to day coding. The Shape example is so ubiquitous because its hard to come up with other good examples of hierarchies. Saying this, I've come across many unnecessary examples of useless class hierarchies. I know whats going through the devs mind, OOP is cool and I want to use it as much as possible. Myself I'm no different, currently I'm mad on functional programming, before that design patterns. You only learn by your mistakes I guess.

To summarize, Keep It Simple!
PDB

There's a new app out for you budding iOS developers, Swift Cheat Sheets, a quick reference guide to Apple's new swanky programming language. There are 15 sections covering topics such as optionals, functions and classes. Each section gets down to brass tacks and shows you example code without pages of waffle. 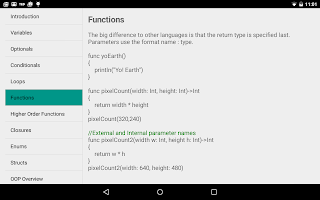 The app is available from Google Play, click the badge below to take a look:

The idea for this App came about because I have been learning how to write iOS apps, so I can port my most popular Android apps to the iPhone. Swift is a great language but I find that I keep forgetting the syntax, especially for functions. So I made lots of notes from example code snippets.

Once I finished my Swift book and made my notes, I considered writing blog posts, however there were quite a lot of notes, so I made an app!

The app is aimed at seasoned developers who understand most programming concepts such as OOP and functional programming. There is little or no explanation for the concepts in the app, just source code! If you need an explanation, Apple provide a good guide.

No doubt as I start writing iOS apps, I'll be adding to the Swift Cheat Sheet app.

There are two versions of Weight Tracker this time round, Weight Tracker 1.16 and Weight Tracker Pro 1.00.00. The pro version of the app is ad free so you can enjoy the app without intrusive ads for the very reasonable price of $1.99 (£1.99, AUD and NZD).

The main change to the free version of Weight Tracker  is that there are new several links to the Pro version on the Google Play Store. There is a link on the menu, on the about form and a reminder every 100 screen changes.

Both apps are compiled against the latest Android SDK, API 21 (Lollipop). I've updated various copyright notices with the year 2015. Screens are now properly tracked, so I can see the screen flows which may help me improve the apps design in later releases.

There are two versions of CleverDic Crossword Solver this time round, CleverDic 1.21.01 and CleverDic Pro 1.00.00. The pro version of the app is ad free so you can enjoy the app without intrusive ads for the very reasonable price of £1.99! The price is even more reasonable if you live in the States $1.99 or Australia 1.99 AU


The main change to the free version of CleverDic is that there are several links to the Pro version on the Google Play Store. There is a link on the menu, on the about form and a reminder every 50 queries.

Both apps are compiled against the latest Android SDK, API 21 (Lollipop). I've updated various copyright notices with the year 2015.

There are two versions of the Anagram Solver App this time round, Anagram Solver 1.05.00 and Anagram Solver Pro 1.00.00. The pro version of the app is ad free so you can enjoy the app without intrusive ads for the very low price of 99 pence or cents! (Buy now before the price rises)


The main change to the free version of Anagram Solver is that now there are several links to the Pro version on the Google Play Store. There is a link on the menu, on the about form and a reminder every 50 queries.

Both apps are compiled against the latest Android SDK, API 21 (Lollipop). I've updated various copyright notices with the year 2015.

There was a comment from one user saying they were initially confused, so I swapped tips 1 and 2 so that the anagram tip first appears on the tip box. Most folk who use the app use the anagram search feature. Click the Google Play Store badge to see the free app:

Weight Tracker Pro is an ad free version of the Weight Tracker App. There are no ads, no In app Purchases, no analytics, no network permissions! You've bought and paid for the software. 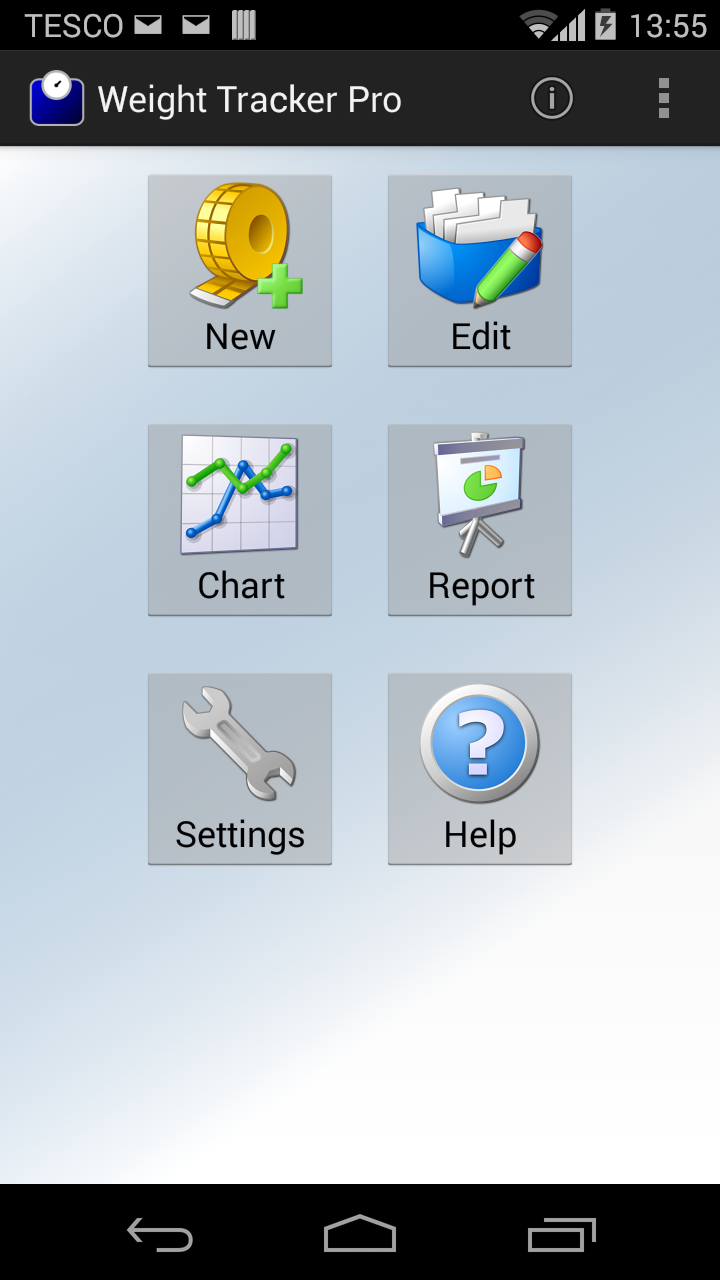 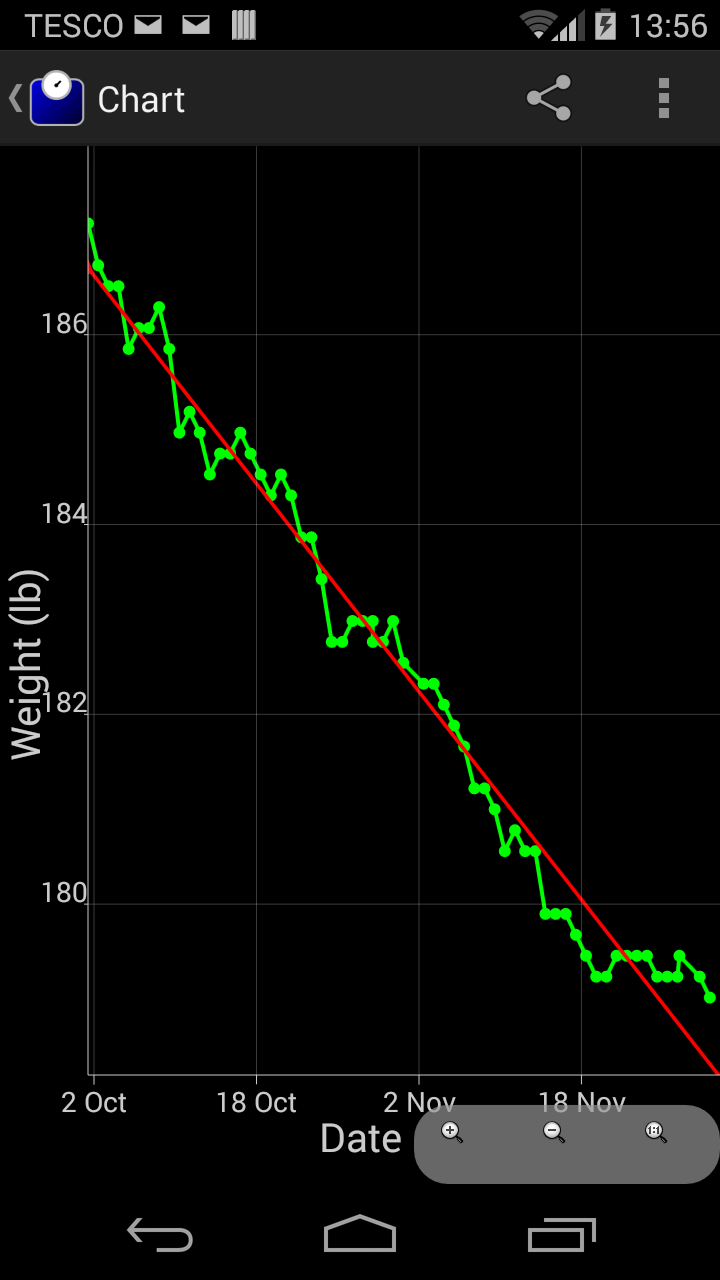 New features will be added to the Pro version first and may be exclusive to the Pro Version. I've kept the cost to a minimum, £/$/Euro 1.99